Breaking News In Anime-Persona 4 Anime To Stream On Anime Network and Hulu!!!!! 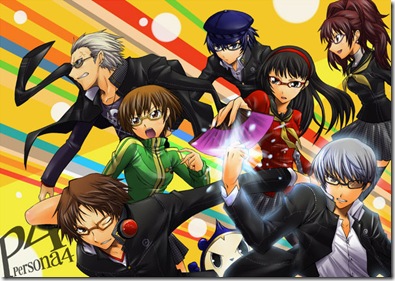 Have I got some interesting news to share with you all. For those of you who are fans of the video game series Persona, hang on to your seat for what I have to tell you.

It has been recently announced that The Anime Network will be streaming the new Persona 4 anime series on their site starting next Thursday (October 6) at 3:00pm EST right after the episodes air in Japan. The episodes will be available to view on the site absolutely free. The series will also be available on Hulu and Hulu Plus twenty four hours after they are posted on the Anime Network website.

It has also been announced that Sentai Filmworks will be releasing the series on DVD and Blu-Ray sometime next year. No official date has been set.

As always, stay with AFC for all the latest on this developing story. And we will also have your first look of the series next week with my thoughts and opinions. So until next time, remember that there is a ton of great anime and manga out there. All you have to do is find it. Ltrs.

This entry was posted on Thursday, September 29th, 2011 at 6:20 pm and is filed under Breaking News In Anime. You can follow any responses to this entry through the RSS 2.0 feed. You can leave a response, or trackback from your own site.

3 Responses to Breaking News In Anime-Persona 4 Anime To Stream On Anime Network and Hulu!!!!!