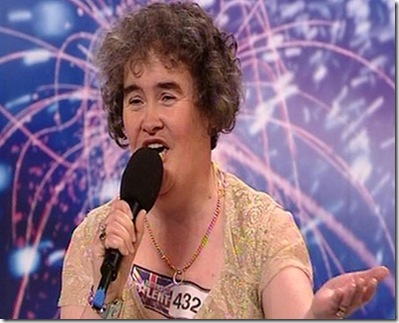 Well here is a bit of interesting news that has captured the anime world by storm. It has been learned that famous British singing sensation Susan Boyle is contributing her talents to a new Japanese anime film entitled “Welcome to The Space Show”.

Ms. Boyle will be singing the films main theme entitled “Who I Was Born to Be”. The film is based off the R.O.D. (Read Or Die) franchise. It is also know that the theme is going to be the first original song from Ms. Boyle that will be ever used in an animated feature.

Now if you haven’t seen her sing before, here is a clip from the season finale of America’s Got Talent 2009 in which she made a guest appearance. When I first saw her, I was very impressed with the power that she has with her voice. It’s just one of those rare stories in which a unknown person can become a successful overnight sensation instantly. But anyway enjoy the clip and until next time. Remember that there is a ton of great anime and manga out there. All you have to do is find it. Ltrs.

This entry was posted on Tuesday, May 25th, 2010 at 7:53 pm and is filed under Misc Stuff. You can follow any responses to this entry through the RSS 2.0 feed. You can leave a response, or trackback from your own site.