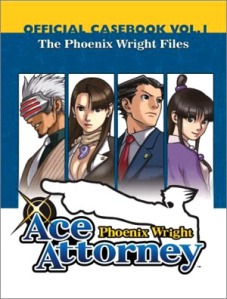 Hello and greetings fellow Otaku from around the world,

I finally had some time to read some manga so now it is time to do my first ever manga review. For my first review, I am going to be reviewing Phoenix Wright Ace Attorney Official Case Book Vol. One. For those of you who haven’t read it yet, I will try to keep this spoiler free as possible. This manga is based off the Phoenix Wright Ace Attorney video games for the Nintendo DS. However the manga is a little different than the games, the manga goes a little more in depth inside your favorite characters such as Phoenix Wight and Maya Fey. The manga also brings some new story lines that are not featured in the games themselves and it also features comments from the authors who adapted the manga about their thoughts on the project.

Overall, from a score of one to five with five being excellent I give this a manga a 4 out of 5. I would have liked to seen more background information about Phoenix’s past and the other characters but I believe that they will come out in future volumes of this series. I totally recommend this manga for those of you are fans of the games and for those of you who are not familiar with the games like myself, this is a great primer to get you started.

I hope you enjoyed this review and please feel free to comment or email me your opinions. Anyway have a great thanksgiving everyone and I will catch you guys later.

This entry was posted on Thursday, November 27th, 2008 at 11:36 am and is filed under Manga Reviews. You can follow any responses to this entry through the RSS 2.0 feed. You can leave a response, or trackback from your own site.